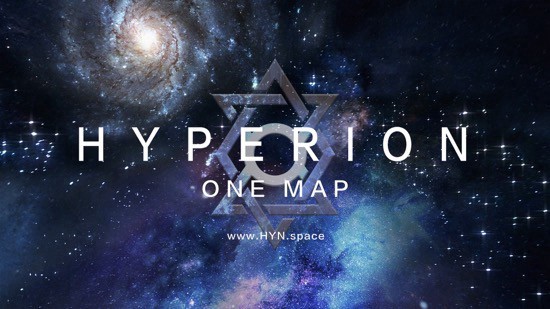 The new model also integrates the internal and external burning mechanism to boost the ecological development. As the planned life cycle of the Hyperion ecosystem suggests, the ecosystem will gradually transit from a token model-driven growth to a service-driven self-reinforcing growth when the burning completes.

This article will guide you through Hyperion economic model 2.0.

Hyperion’s vision is to build a map + location ecosystem, and apply it to future smart city, such as AI, autonomous driving, and IoT etc., which heavily rely on a long-tail, accurate, and real-time location data. The economic model supports the vision with a technical, economic and social framework based on 3-tier architecture.

A decentralized community structure as the backbone of the ecosystem

At Titan layer, token holders participate Map3 nodes through micro-staking, and Map3 node operators lead all participants to join the running of Atlas chain without additional investment in HYN through re-staking.The selection process of Map3 nodes is also cherry-picking the the qualified candidates for mining nodes on-chain.

Map3 node initiators must at least stake 20% of HYN, and micro-stakers must pledge no less than 1% of the total requirement and can withdraw the pledge after 7 days since the application.

As in the early stage, Hyperion is committed to building a solid base of contributors in a short period. The dynamic structure effectively combines the scaling cycle and the burning mechanism to boost the development of ecology towards maturity and market autonomy via the cooperation between early and late participants.

At Map3 level, an increased number of nodes provide a higher level of fault tolerance and wider service coverage to the whole network, and thus improve the network security. Map3 have a total of 10 scaling cycles. Let T0 be the day the Atlas Blockchain mainnet launches. Each scaling cycle will split the existing Map3 nodes into x2 nodes (one running but with fewer stakes and the other one in the Standby stage with splitted stakes from the original node). The standby nodes will initiate when filled with the sufficient amount of minimum staking.

The node will launch and lock down all token staked for 180 days if the required staking amount is met, and the node operators can use the corresponding private key to initiate the Map3 node; if not having reached sufficient staking amount, the node continues to standby.

One week before the node expires, initiators and participants will decide whether to renew for another 180 days (Default to automatic renewal). With sufficient staking before the deadline, the node will automatically re-initiate; otherwise, the node will standby to crowdfund.

Scaling at Map3 level continuously attracts small investors to participate the running of Map3 nodes by delegating a small amount of HYNs through micro-staking to support map service distribution, or cooperate with other token holders to jointly-operate Map3 nodes. As Map3 network scales out periodically, both the number of Map3 nodes and total stakes in the network increases. Scaling occurs every 3 months in the 1st year and adjusts to every 6 months till the end of the 4th year.

At Atlas layer, the increased total Map3 node-staking in the Map3 network promotes the single node-staking amount of Atlas nodes.

Atlas nodes serve Hyperion map blockchain by dealing with on-chain transactions and settlements. The min. total staking amount of an Atlas node is 1 million HYN, but only 88 will be chosen to participate blockchain services and get mining rewards, ranked by delegation amount. An influential Map3 operator can align multiple scaled nodes to co-initiate an Atlas node and become Atlas operator; or choose an expecting Atlas node to stake to.

The staked HYNs will lock down for 7 days, after which the Map3 operator can transfer to another Atlas node. The white paper also clearly indicates the minimum staking requirement for Atlas node initiators to prevent malicious behaviors by staking punishment.

Users can also check the mining rate of each Atlas node from Titan. A high-rating Atlas node tends to attract more stakers.

At the same time, Hyperion burning mechanism aims to boost the ecosystem by reduced supply of HYN tokens with the increased delegation and service demand, at early and mid-stage. The burning will be over when ecosystem gets mature.

In the mid-stage, the increased Map3 nodes will accelerate the scale of the Map3 network, improve Map3 service efficiency and quality, and attract more end users. Till this stage, all Map3 services are free to public access to bootstrap the ecosystem.

As service usage becomes stable, the burning mechanism will be terminated, and map service will be charged according to market mechanism. For instance, the increased number of Map3 nodes will reduce the average node profit. Those with insufficient service capacity and lower rewards might quit the network, reduce the total number of nodes and in return push up the overall node profits.

Node incentives
The initial block reward mining rate is 0.33 HYN per second, which is 2 HYNs every 6 seconds. The specific rate also refers to the block mining frequency of the mainnet. Each Atlas mining node will receive 1/88 of the block reward.

However, the monthly PoW rewards distributed to Map3 nodes increase with time. As Atlas participants, the Map3 incentive (i.e. PoW incentive) is distributed to the operators and micro-stakers of the Map3 node linearly proportional to their staking volumes. A customized (Default to 20%) management fee charged by the operator is applied to the incentives earned by microstakers.

At Map3 level, the total number of Map3 subsidies each month increases overtime with the scaling cycle, from initially 300,000 HYN per month in the Genesis Scaling Cycle, and it increases with a compound 10% rate over every scaling period.

In addition, the PoWs are ranked according to node workload and coin age. To simply put, more service workload and longer coin age improves a PoW ranking, as long-term commitments are key to the overall Map3 network quality. The coin age is calculated by the lock period of a Map3 node. Each additional 1 day equals to +1 coin age, and 1 day gap equals to -2, and it caps at 500 days. The bonus factor increases by 1% every 50 days, and it is capped at 10%. All ranks higher than 80% will be lowered to 80% to counter the adverse effect of collusion in pumping up the PoW illegitimately.

The Genesis Scaling Cycle are best suitable for early participants to get a stable reward based on the micro-staking amount and the coin age of the Map3 node overtime. As scaling cycle develops, the dynamic reward mechanism integrates halving cycle and other complex variables as the node increases. In addition, the late new comers tend to join nodes with higher bonus factors accumulated overtime for higher rewards, as return, the early operators are more likely to develop a more solid decentralized community.