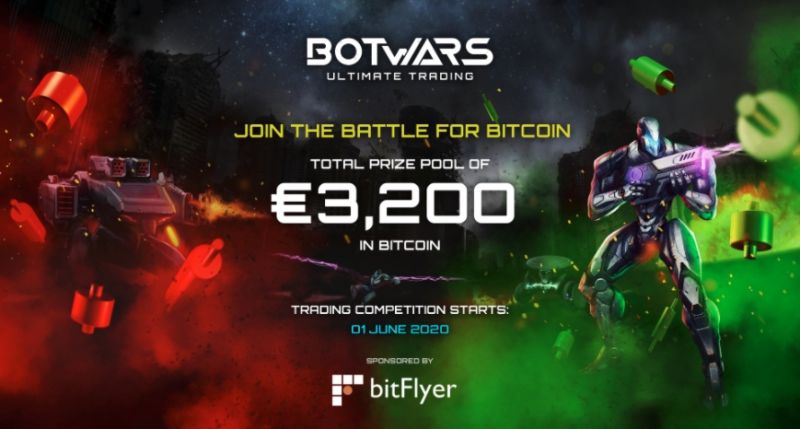 In Botwars Ultimate Trading, players need to build an army of trading robots (each representing a trade) and lead them into battle to conquer the cryptocurrency markets.

bitFlyer Europe, the European arm of bitFlyer Inc. the Japanese-owned cryptocurrency exchange, is providing the prize pool to enable Quazard to bring the competition alive.

The latest release of Botwars is available to download on iOS and Android and the competition launches on 1st June.

Paul Lindsell, CEO and founder of Quazard said, “Millennials are looking for experiences from brands, rather than just services, and that includes cryptocurrency exchanges. Gamification and game based learning can help provide that. Working with bitFlyer means we can not only give newbie traders a safe environment to learn how to trade within Botwars, but also a safe and reputable exchange to trade cryptocurrency for real.”

Andy Bryant, COO of bitFlyer Europe, said, “Gamification in trading is a growing trend and this industry-first partnership between bitFlyer and Quazard is a step forward in bringing cryptocurrency trading to the mainstream. It’s a fantastic opportunity for people to try out trading in a risk-free environment, but with the incentive to earn a reward for developing their skills.”

bitFlyer launched in the USA in November 2017, followed by bitFlyer Europe in January 2018, both as fully owned subsidiaries of bitFlyer, Inc., a household name in the cryptocurrency space in Japan, and one of the longest-standing cryptocurrency exchanges. It is the only cryptocurrency exchange to be licenced in Japan, the US and Europe combined, and has also recently been recognised as one of only 10 exchanges that isn’t faking trading volumes.