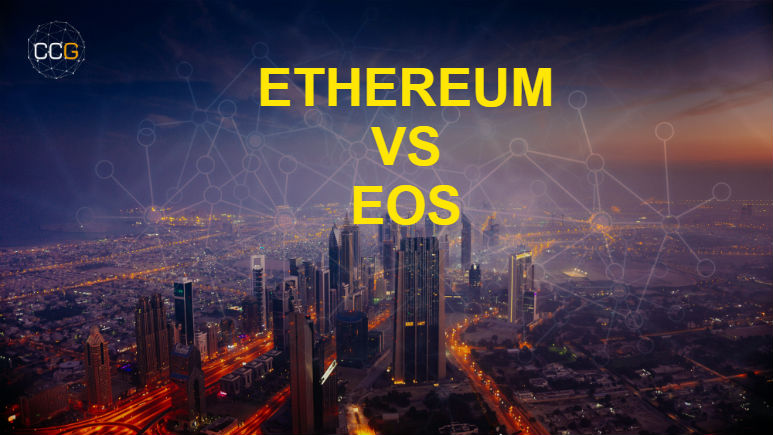 Most of the mainstream hype behind blockchain technology revolves around platforms that emphasize trading a decentralized currency, like Bitcoin. But alternative networks like Ethereum and EOS are becoming more popular due to their efforts to capitalize on the more useful capabilities of blockchain networks. These platforms both serve as environments for developers to build decentralized applications.

While they are united in their goal of facilitating the production of decentralized applications (dapps), the way Ethereum and EOS are structured, marketed, and supported are quite different.

In the following sections, we highlight what sets these two platforms apart and how they match up to one another.

Ethereum vs EOS: Competitors in the Dapp Marketplace

Smart contracts are applications that can be programmed to run automatically, without any need for user input. Because these contracts are developed within blockchains, they effectively eliminate the risk of fraud or malicious third-party interference. Using Ethereum, businesses can create applications that can handle many tasks such as recording information or safely conducting transactions.

EOS is a blockchain platform that operates using a similar model as Ethereum, although Ethereum was the first platform to launch in this space. It is yet to be launched and is slated for a June release. While there are similarities, EOS is not exactly the same as Ethereum, from a technical and practical perspective.

Their platform will also serve as an environment in which developers can build and deploy various types of smart contract based decentralized applications, but the way they are handling this task differs significantly.

Because EOS is a newer project, they have a valuable opportunity to capitalize on recent technological advancements that have been made in the crypto space. This cutting-edge technology should allow them to process a higher volume of transactions per second and do so much faster than Ethereum. It will also benefit from the features that provide the platform with inherent flexibility like interchain communication.

These are the key points you need to know in order to understand why Ethereum’s first-mover advantage in the dapp space may not enable it to resist being overtaken by EOS.

When it was proposed in 2013 by Vitalik Buterin, the concept of Ethereum didn’t gain much traction from the cryptocurrency community. But once they released their white paper, more members of the community recognized just how valuable a decentralized application platform could be in practice.

Over the past several years, Ethereum has continued to receive funding from various different backers via the likes of crowdsales and private investments. Today, many speculate that Ethereum will be the leading smart contract platform for organizations that need to build dapps in the financial services industry.

EOS has yet to launch, but there is already a high level of hype surrounding this platform. Because it operates using a proof-of-stake consensus protocol, many believe that it will be less centralized and operate more efficiently than Ethereum.

This makes EOS a strong candidate for becoming the host of a diverse range of dapps, especially those that would require a large amount of resources and incur huge costs when run on the Ethereum blockchain. While on EOS, there are no transaction fees so users have limited financial burden.

While Ethereum isn’t yet “outdated,” some describe EOS as “Ethereum with a new motor.” This is because EOS hopes to leverage recent technology to conquer many of the scalability, usability, and functionality issues that currently plague Ethereum.

Ethereum’s blockchain currently uses a proof-of-work (PoW) consensus protocol that can only process an average of 15 transactions per second. This consensus method also prevents Ethereum from being able to fix broken decentralized applications on the network, often forcing them to have a fork if they need to fix an issue.

For comparison, EOS will launch using a delegated proof-of-stake (DPoS) protocol that should eliminate the bottleneck that Ethereum is experiencing. DPoS protocols are also impressive because they can allow developers to freeze the network when a broken application is identified. While frozen, the developer can fix the problematic application without negatively affecting other accounts within the network.

PoW requires miners to prove how fast they can verify transactions on the network in order to earn their reward. On the other hand, a basic PoS involves earmarking a certain volume of tokens in order to create a masternode. Masternodes are computers that facilitate various functions across the network, such as instant transactions. They are typically rewarded with tokens for carrying out these tasks.

With a DPoS protocol, coin holders can vote for representative nodes that are responsible for verifying transactions and forming consensus. These representatives are also paid for performing this work.

EOS likely went with this more democratic consensus method in order to negate a risk commonly associated with PoW or PoS based blockchains — specifically the risk of any party consolidating too many tokens and gaining unreasonable levels of control over decisions made across the network.

The EOS team claims that their DPoS network will be able to process an average of 1,000 transactions per second, on release. Sometime after the release, they expect to reach transaction processing capability in the tens (or possibly hundreds) of thousands per second.

That said, it is also important to note that Ethereum is taking steps to solve this issue as well. As recently Ethereum announced their plans to have a hard fork to introduce Casper —  an updated version of the Ethereum network that runs using a more scalable consensus system. As Casper is gradually phased in, it will start as a hybrid between proof-of-work and proof-of-stake.

Another key difference is the programming languages that are usable on the EOS and Ethereum platforms. Many developers are discouraged to use Ethereum because it only allows applications to be written using their native language, Solidity.

On the other hand, EOS allows users to use any language that can be compiled in Web Assembly (WASM) and a majority of developers opt to use C++. Because far more people know how to program in C++, this is seen as a hugely appealing factor.

The most attractive feature listed in the EOS whitepaper is horizontal scalability. This essentially means that—unlike Ethereum—the EOS blockchain will be capable of processing transactions while simultaneously executing smart contracts. This would set a precedent in the blockchain technology world and likely legitimize their claim to the throne that Ethereum currently resides on.

Is EOS Worthy of the Title “The Ethereum Killer”?

There is no small amount of skepticism circling around EOS due to the fact that there are not yet any results available to back up their bold claims.

Still, with so many noteworthy features on the slate, the future for this platform should be bright if the team behind it can execute properly. As their mainnet launch is scheduled for June 2018, we will soon know whether the plans of EOS will pan out successfully.

In the dapp market, Ethereum already has the early mover advantage.

Due to over a year’s head start on all of their main competition, Ethereum already has hundreds of clients who depend on their platform to deploy their decentralized applications. This means that people have invested a compelling amount of time and effort into learning how to use Ethereum.

If they move their operations onto another application, like EOS, they may potentially need to start this process over on the new platform. Carrying all of this data to another platform may not be practical or affordable, so many users might opt to stick with Ethereum.

Much is still unclear about how these two networks will hold up against each other in the dapp marketplace.

EOS may not be marking Ethereum for death just yet, but if EOS manages to realize the plans they have stated, Ethereum might have some real difficulty competing with this platform.