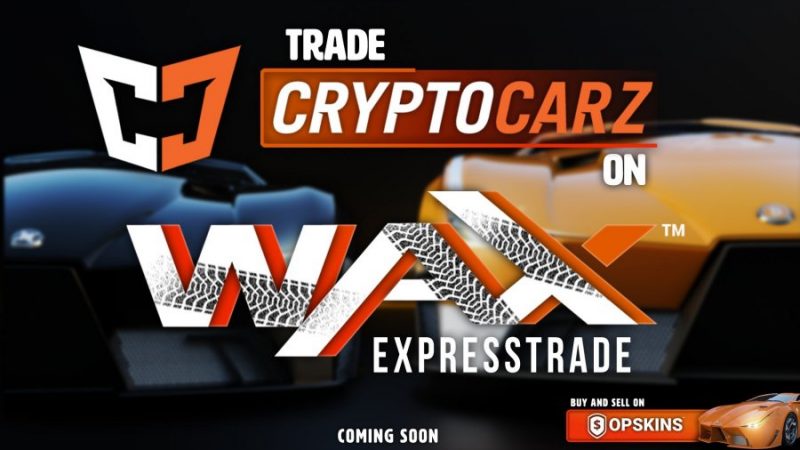 CryptoCarz and Worldwide Asset eXchange (WAX)™ announced that the company’s in-game items will be tradeable on WAX ExpressTrade and available for purchase on OPSkins™ using WAX Tokens, Bitcoin, ETH, US dollars, Euros and dozens of other currencies.

CryptoCarz, the debut project for Blockchain Studios, is a multiplayer virtual reality (VR) enabled racing game powered by blockchain technology. Players’ cars are unique, limited-edition virtual items stored on the blockchain, meaning they’re owned entirely by the user. Cars are kept in virtual garages, where they can be modified and taken to race online.

The partnership enables gamers to purchase CryptoCarz virtual assets—cars and car components—on OPSkins and trade them through WAX ExpressTrade. This means users can buy cars, customize them into unique items, and resell or trade them. Special edition items will be discoverable in-game via loot crates, which can be opened using WAX Keys. Additionally, virtual items, such as VGO, purchased or traded outside of CryptoCarz will have the potential to be used within the game, an exciting step towards increased flexibility of use for virtual gaming items.

“Working with WAX is a critical pathway for CryptoCarz, and will help take our racing vision to over 400 million potential users,” said Daniele Sileri, CEO of Blockchain Studios. “We share the belief in the power of blockchain technology applied to digital gaming items. The aim of our collaboration is to enable the interoperability of items between different platforms, providing new possibilities for gamers everywhere.”

“The inception of blockchain-based games and collectibles presents a new opportunity for the crypto community to get involved, and game developers are taking notice,” said William Quigley, CEO of OPSkins and WAX. “As the popularity of blockchain games and Crypto Collectibles™ grows, so does the need for a trustworthy marketplace, which is where WAX and OPSkins come in. Integrating CryptoCarz to that ecosystem is an exciting move for us and for the blockchain-based gaming community as a whole.”

WAX was built by the creators of OPSkins — the dominant virtual item marketplace that has facilitated over 150 million purchases of digital collectibles. With the integration of CryptoCarz’ in-game assets onto the OPSkins platform, WAX Tokens gain additional utility and more players are incentivized to join the ecosystem.

About WAX (Worldwide Asset eXchange)WAX is a blockchain-based platform, enabling anyone to operate a fully functioning marketplace for virtual items with zero investment in security, infrastructure or payment processing. Developed by the founders of OPSkins, WAX is designed to serve the 400+ million online players who already collect and trade video game items and other digital collectibles. WAX ExpressTrade, a free, instant peer-to-peer trading service, is now live and supports VGO, the most transacted Crypto Collectible by volume. With the inclusion of WAX, game developers and collectible creators have access to a global market of buyers and sellers and an easy-to-use marketplace for their customers.