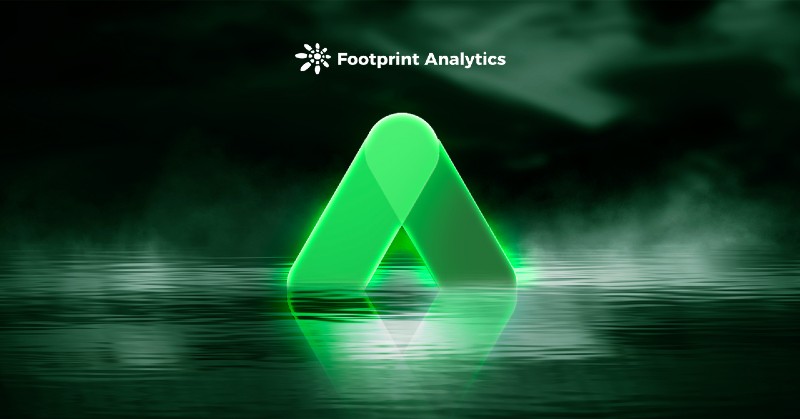 On Feb. 10, Terra tweeted that it would inject $450 million into its official DeFi platform, Anchor Protocol. The announcement comes almost a year since Terraform Labs Foundation injected approximately $70 million into the project.

While Anchor looks similar to most other lending protocols, it’s high APY for stablecoins—always around 20%—makes it stand out. In this article, we’ll look at how Anchor Protocol works and how it achieves such high returns.

How Does Anchor Protocol Work

Anchor Protocol defines a money market between lenders and borrowers. The annualization of this market is not determined by traditional supply and demand, but by coordinating rewards across multiple PoS blockchains, stabilizing at around 20%.

Lenders deposit aTerra into the Anchor Money Market and receive aTerra generated by casting as a receipt. This can be used for redemptions, pro-rata interest, and lender subsidies.

The pro-rata interest is generally paid from the earnings reserve or the ANC (Anchor Protocol’s governance token) received by the borrower.

aTerra deposited by the lender lent to the borrower after aggregated by the money market.

The provision of liquidity can be rewarded with ANC, which can be used to repay the interest on the borrowed funds. bAssetas should be within the money market whitelist, only LUNA and ETH are available now.

Liquidators focus on risky loans. In the event that LTV is above Max, the liquidator will bid on the contract being liquidated. It offers to buy the bAssets of the liquidated (borrower) at a discounted rate, paid in UST. 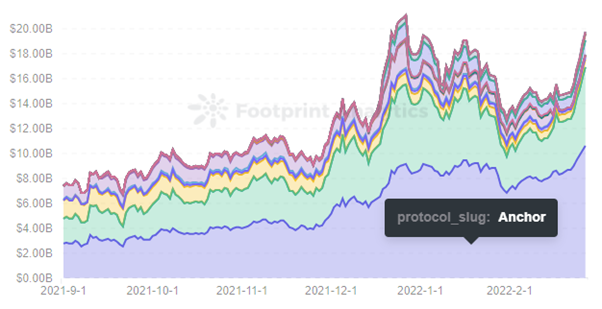 Combined with LUNA’s only whitelist bAssets, it can be inferred that the price of ANC is somewhat influenced by LUNA. In general, ANC continues to be influenced by the general trend of cryptocurrencies.

The market cap of ANC has remained relatively stable over the last 180 days, fluctuating up and down around $450M and peaking at $773M. The overall trend has been a steady increase.

How important is Anchor Protocol to Terra?

From the Anchor Protocol’s stats, we can see that Anchor has been online for less than a year, but has already achieved good results.

Anchor’s sought to be the benchmark for the DeFi by providing a stablecoin deposit of APY 20%, which is above the average stablecoin rates provided by most projects.

If Anchor crashes, then the equivalent TVL will be zero. Terra will probably fall out of the top 10 public chains. After all, Anchor’s $8.71 billion TVL represents 71.07% of Terra’s TVL. 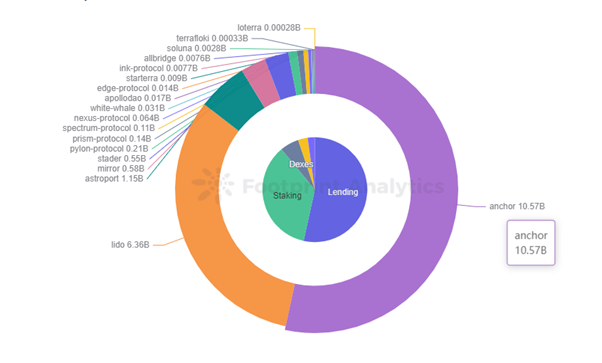 Therefore, Anchor his crucial to the Terra ecosystem.

The most common type of aTerra used for collateral in Anchor is UST, which is minted by LUNA and pegged to the U.S. dollar at $1. If there is a shortage or oversupply of UST, the price of LUNA will be affected, further affecting the Terra ecosystem.

In this way, Anchor is important enough to disrupt Terra, which is why Terra officials have injected funds several times.

Some thoughts on Anchor Protocol

The external capital injection is not a long-term sustainable path. Once the bear market arrives, Terra’s official capital injection will not be able to keep covering Anchor. Ultimately, the Anchor project needs to improve its current model and enhance its ability to combat the downside risks of cryptocurrencies. Anchor can focus on 3 main points as follows.

Anchor is also subject to risks such as possible hacking and decoupling of the UST from the USD. Users should carefully consider whether they can afford the risk of investing before investing.