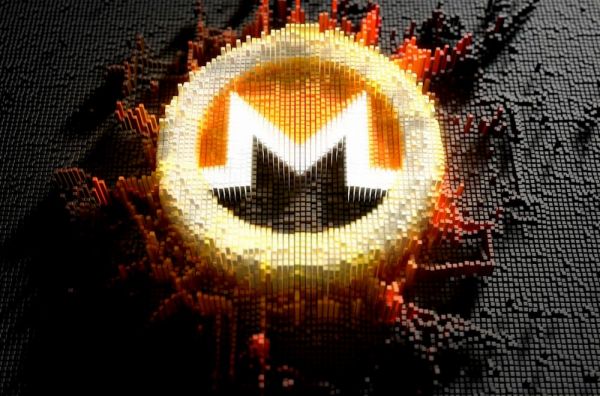 Bitcoin’s share of the cryptocurrency market is sliding, with a host of alternative digital coins gaining ground as developers race to create digital cash that can gain a footing in mainstream commerce and finance.

As these “altcoins” grow in prominence, Reuters is publishing a series of stories that examines the features and characteristics of some of the alternatives to bitcoin that have grabbed the attention of developers, investors and regulators.

The first in this series looks at Monero – referred to as a privacy coin because it allows users to conceal nearly all details of transactions. It has become increasingly used for illegal purposes.

Since its launch in 2014, Monero has grown to be the 12th biggest cryptocurrency by market capitalisation with around $1.4 billion-worth in circulation.

HOW IS MONERO DIFFERENT TO BITCOIN?

Every transaction involving Monero obscures the digital addresses of the senders and receivers, as well as the value of the transaction. That offers users near-total anonymity, allowing them to instantaneously send digital cash without leaving any clues.

Bitcoin was initially seen as opaque, as the identity of the owners of digital wallets used to send and receive bitcoin is not public.

But details recorded permanently on the blockchain after bitcoin is sent and received can, in fact, give up clues that can be used to pinpoint those identities. This has become increasingly easy with the advent of firms that specialise in analysing blockchain transactions. 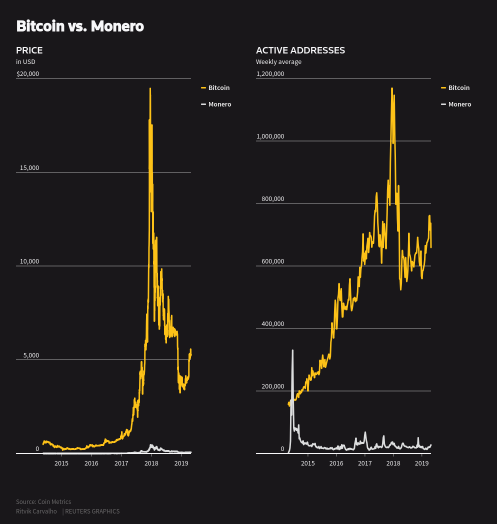 When Norwegian police earlier this year gave details of the kidnapping of the wife of a wealthy businessman, they said the family had demanded a ransom in cryptocurrencies. Local press reported that the suspects wanted to be paid in Monero.

The unusual request underlined a growing trend for criminals to seek alternatives to bitcoin, which through its first decade has become the cryptocurrency of choice for illicit activities from buying contraband to laundering money, cyber security experts and law enforcement agencies say.

Monero’s use on darknet marketplaces – sites used for buying illicit goods from drugs to stolen credit cars – is on the rise, said Tom Robinson, chief data officer of Elliptic, a London-based firm that provides blockchain-tracking software to law enforcement agencies and private companies.

Three of the biggest five darknet markets now accept Monero, Robinson said, though he added the caveat that bitcoin is still the most widely used cryptocurrency for darknet payments.

One of Monero’s developer team said Monero enables crime no more than cash. Its developers should stay out of debates on its traceability or risk undermining its decentralised nature, Francisco Cabanas told Reuters.

“It doesn’t selectively encourage crime, it encourages commerce,” said Cabanas, who goes by the nickname “ArcticMine,” in an interview via Skype from Vancouver. “In that respect, it’s no different to cash.”

Monero is also widely used for “cryptojacking,” or illicit cryptocurrency mining, where hackers infect computers and steal their power to mine new coins – a highly lucrative endeavour.

Nevertheless, over 4 percent of the 17 million Monero in circulation were mined using malware, said Guillermo Suarez de Tangil, a cybersecurity lecturer at King’s College London who has researched Monero.

“There is a clear phenomenon of the underground using Monero, and selling malware that will contribute to Monero mining,” he said.

Monero’s developers say its characteristics make it a useful tool for companies looking to maintain commercial secrecy. Users in repressive countries looking to avoid censorship or surveillance can also safely move money in the form of Monero, they say.

IS LAW ENFORCEMENT WORRIED? WHAT DO REGULATORS SAY?

Cryptocurrencies are mostly unregulated. Though countries from Britain to the United States are looking at how to deal with the phenomenon, few have set out comprehensive strategies for dealing with digital coins.

Asked about Monero, Borja Pastor de la Morena, an official at Europol in The Hague who oversees the agency’s work on money laundering said: “This kind of alternative cryptocurrency is more opaque and better at concealing the activity of the users.”

He said: “It’s a phenomenon that we are paying attention to”

And though aware of the propensity for cryptocurrencies to be used for money laundering, few financial national-level regulators have specifically addressed privacy coins.

Britain’s finance ministry, which leads a task force that is looking at if and how Britain will regulate cryptocurrencies, said it was aware of the potential for Monero to be used for criminal ends.

“We recognise the risks with cryptoassets like ‘privacy coins’ being used for illicit activity,” a spokesperson said, adding that it would “soon” launch a consultation on bringing crypto-related companies under anti-money laundering regulation.

Like bitcoin, Monero is governed by a virtual community of hundreds of developers that lacks any centralised authority.

Cabanas is one of only two publicly-known members of its seven-person core developer team, who act as stewards for updates to its code.

Mitchell Krawiec-Thayer, a San Francisco-based blockchain developer who is part of Monero Research Labs, said Monero is designed so it can be easily mined by individuals rather than powerful groups that team up to mine coins in industrial quantities.

“This lowers the barrier of entry to everyone,” he said. “The downside is that criminals have started using that. Stealing other people’s resources, putting strain on their equipment – it’s a straight-up threat.”

Monero has recently launched a response group, where those infected by malware can seek help, Krawiec-Thayer said.

WHO USES MONERO FOR LEGITIMATE PURPOSES?

Data on who uses Monero, and why, is scarce. That’s a challenge for understanding the usage of any cryptocurrency, even more so for one designed to obscure its tracks.

Daily transactions for Monero – one proxy for how widely the cryptocurrency is used – have hovered around 8,000 this month, data from website CoinMetrics shows. The number of active digital wallet addresses for Monero has hung around 5,000.

Monero is not the only privacy coin. Others, such as ZCash, have grown popular with investors, often for speculative reasons but also because of interest in their privacy features.

Grayscale, the world’s biggest crypto asset manager with around $1.3 billion under management, allows investors like hedge funds to invest in ZCash.

Amid growing acceptance of privacy coins, a number of major exchanges list Monero. For example, Malta-based Binance, one of the world’s largest exchanges, allows users to trade the coin.

Binance declined to comment on Monero, but said it has a comprehensive review process for evaluating coins and tokens for listing, and that it carries out periodic reviews on projects.