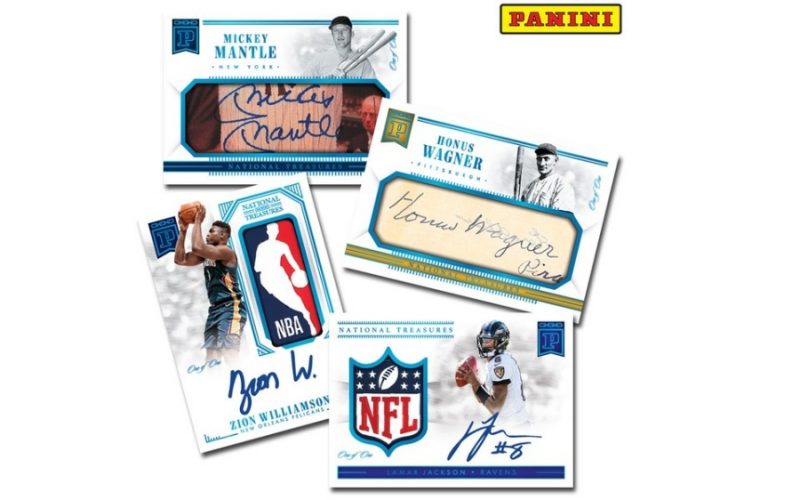 New collection of licensed sports trading cards will use same technology as Bitcoin to verify authenticity.

Panini America will launch a new range of licensed trading cards featuring blockchain technology, the digital record of transactions that underpin cryptocurrencies such as Bitcoin.

The blockchain trading cards will launch this month on www.paniniamerica.net and will be sold in an auction format in US dollars.
Ten cards will be released each week, featuring Panini’s popular National Treasures design and 100 athletes from a variety of sporting leagues, including NBA stars Kobe Bryant, Stephen Curry and Shaquille O’Neal, NFL quarterbacks Tom Brady and Peyton Manning, and fooballers Neymar, Diego Maradona and Gareth Bale.
Each card is a unique one-of-one that not only includes a blockchain digital asset – but will be accompanied by a physical version of the card that includes an autograph of the respective player and, in some cases, a piece of memorabilia. The blockchain asset will be an exact representation of the physical version of the card.
Panini says the new technology will add a further layer of authentication to the collectables, especially the most sought-after cards which can sell on the second-hand market for six figures.
“We have spent years researching and exploring the best possible way to incorporate blockchain into our trading cards as another level of authentication – as well as the best way to introduce blockchain to sports fans and collectors,” says Mark Warsop, CEO of Panini America.
“We were very thorough and a number of factors were considered in selecting the players that will be released in our Panini trading cards that utilise blockchain technology. There is not a more iconic trading card than the rare 1909-11 Honus Wagner T206 baseball card.
“To be able to produce the first ever Honus Wagner blockchain card, along with all of these other players utilising blockchain technology and ensuring that these cards will now live forever in the digital realm is truly an honour.”