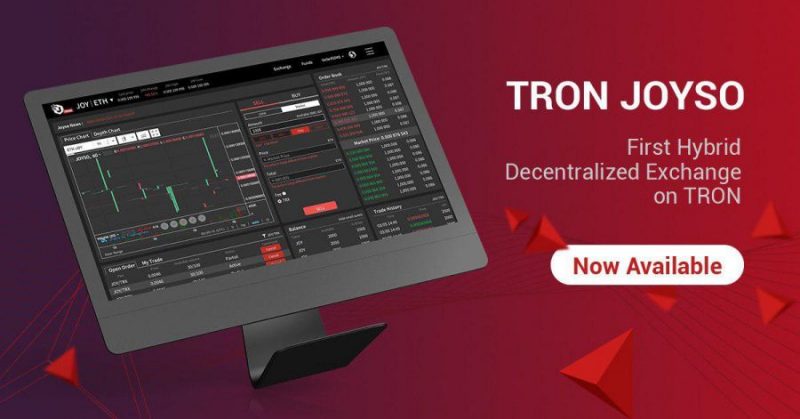 Since early 2018, JOYSO has been providing trading services to crypto traders from a hybrid decentralized  exchange. JOYSO has been working actively with TRON to promote blockchain, including events such as Taiwan Blockchain Summit and Fintech Taiwan 2018. In December, TRON enjoyed a successful meet up session focus on Decentralized Applications (DApps) where developers gathered and had an interactive session with TRON’s Head of Technical Integration.

“Our co-operation with TRON isn’t limited simply to technical developments, it is a partnership that contributes to the entire blockchain ecosystem in Taiwan.” Said JOYSO representative. “We’re a big community evangelist of an innovative company, and hosted their very first meet up called TRON Dev+ ,in Taipei.”

TRON JOYSO will be launched on TRON’s mainnet, aiming to become one of the key infrastructures for all Decentralized Applications (DApps) on TRON by enhancing the liquidity in its ecosystem.

JOYSO – Reliable, Secure and Fast.
JOYSO, founded by Tom Soong, a hybrid decentralized trading platform for  cryptocurrencies which reduces the risk of being hacked and provide users with cost efficient trade. JOYSO Enterprise was introduced to help organization in adoption of blockchain technologies also gains traction in development of technology in the blockchain industry.

Press Release sent by Joyso, content was not edited by CCG.