What are Sidechains and Childchains? 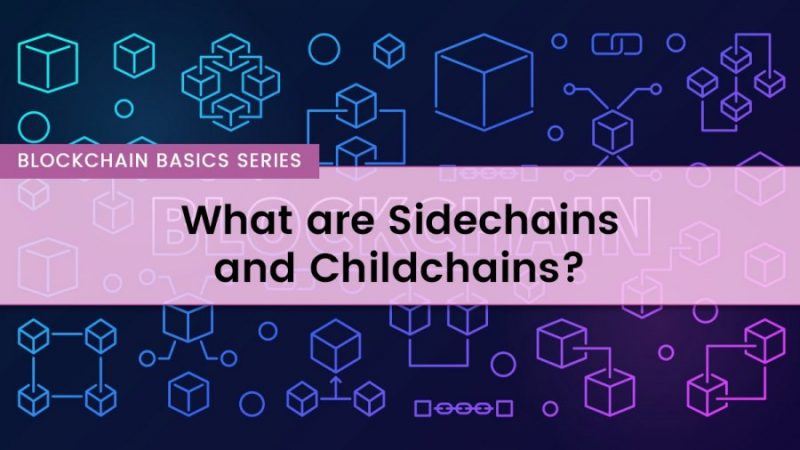 The common problems with conventional Blockchain network are scalability and Blockchain bloat. There is a need for new architecture to solve these issues.

Sidechains enable developers to deploy Blockchain solutions that can quickly scale, at lower cost and under at a high level of security. Sidechains can also be referred to as childchains.

If you have been wondering what this technology is all about, today is your lucky day. We shall answer most of your questions in this article.

So, what are sidechains?

So, sidechains should simply be understood as a discrete Blockchain that is linked to the main Blockchain via two-way pegs. The functionality of side chains holds significant potential for the enrichment of the capabilities of existing Blockchains.

The two-way pegs enable assets to be interchanged between the parent Blockchain and the sidechain; for instance, using Bitcoin as the underlying asset for a separate Blockchain.

The rate at which these assets are exchanged between the main Blockchain and the childchain is usually predetermined.

How do sidechains work?

To use a sidechain, a user on the parent chain has to send their funds to an output address. Once the coins are in the output address, they are locked. This means that the user is no longer able to use the coins anywhere else.

As a measure to ensure increased security, communication is sent across the main chain and sidechain and a waiting period is allowed after the user’s funds have been moved to the output address. When the waiting period is over, a corresponding amount of coins is released on the side chain. The user is then able to spend the coins on the sidechain.

When moving from the side chain to the parent chain, the user sends the coins from the sidechain to an output address where they are locked. After the waiting period is over an equivalent amount of coins is transferred to the parent Blockchain.

A federation is a group of servers that act as an in-between point between the main chain and a sidechain. The Federation decides when the user’s coins are locked as well as when they are released. The developers of the sidechains can choose the members of the federation. The downside to using federations is that they add another layer between the sidechains and the parent chain.

Sidechains require to have their own miners. Miners can be given incentives through merged mining. If you are new to this concept, this is where two different cryptocurrencies with the same algorithm are mined at the same time.

Rootstock is an open source smart contract platform with a two-way peg to Bitcoin. It allows the Bitcoin miners to participate in the smart contract revolution by rewarding them via merge-mining. The project aims at adding value and functionality to the Bitcoin network by enabling near-instant payments, higher scalability, and smart contracts.

Bitcoin lacks turing-complete smart contract abilities. This is a significant disadvantage to Bitcoins growth. RST steps in to provide the unavailable technical needs as a Blockchain with a two-way peg to Bitcoin. Since the sidechain does not have any coins of its own, it does not offer competition to Bitcoin.

Merge-mining secures rootstock. This means that the Blockchains security is at the same level as that of Bitcoin. The two-way peg security will rely on a federation holding custody of Bitcoins before switching to an automatic peg when the security trade-offs of the automatic peg get accepted.

RSK scales to 100 transactions in a second while still upholding decentralization and reducing bandwidth usage and storage. The chain achieves this by employing fraud profs, probabilistic verification, and Blockchain sharding techniques.

This is a projected framework of incentivized and enforced implementation of smart contracts. Plasma is scalable to billions of state updates in a second. This will enable the Blockchain to represent a high number of decentralized financial applications worldwide.

Alpha functions as a sidechain to Bitcoins testnet. The peg mechanism currently works through a centralized protocol adapter, as stated in the sidechains whitepaper. An auditable federation of signers manages Testnet coins transferred to the sidechain. The federation is also relied upon to produce blocks through the signed blocks element. This creates the possibility of exploring the possibilities of the new chain using different security trade-offs.

Liquid is Blockstream’s first commercial sidechain. It facilitates immediate transfer of funds between exchanges without having to wait for the delay of confirmation in the Bitcoin Blockchain. Liquid is available to users of all participating Bitcoin exchanges.

This an open sidechain of Ethereum with proof of authority consensus reached by independent evaluators. The project’s goal is to build a public network for small contracts that is fast, secure and cost-effective. Its consensus mechanism allows very fast block times of less than 5 seconds.

Another feature of POA is built in governance that supports voting at a consensus level by allowing validators to vote for adding or removing validators on the Governance dApp. The network also supports a large assortment of proof of identity dApps and incorporates them to prove the identity of validators.

Unlike other Blockchains that require vast computational resources and proofs of work, creating blocks in this chain does not require mining. The POA network model can be used as a blueprint for quick launching of open on-premise networks with built-in value.

Side chains have two main advantages. Their first advantage they have is that they are permanent. You do not have to create a new sidechain every time you need to use one. Once a side chain is built, it is maintained and can be used by anyone doing a specified task off the main chain. The other advantage of sidechains is that they allow interaction between different cryptocurrencies. Developers get the opportunity to test software upgrades as well as beta coin releases before they are released on the main chain.

Miners are needed to ensure the safety of the sidechains. This makes the formation of new sidechains a costly venture. Hefty amounts of investments have to be made before any new sidechain can be created. Another downside to sidechains is the requirement of a federation. The extra layer formed by the federation could prove to be a weak point for attackers.

To scale Blockchain, sidechain or childchain solutions cannot be undermined. Sidechains are separate Blockchains that are linked to the main Blockchain using a two-way peg. They are an auxiliary network that executes the complementary function of: faster transactions, lower transaction costs and greater scalability in terms of the number of transactions that can be supported in a network at a given time.

In a nutshell, Sidechains are expected to bring about a significant improvement in the capabilities of existing Blockchains. They are the avengers that will save Blockchain from becoming obsolete.