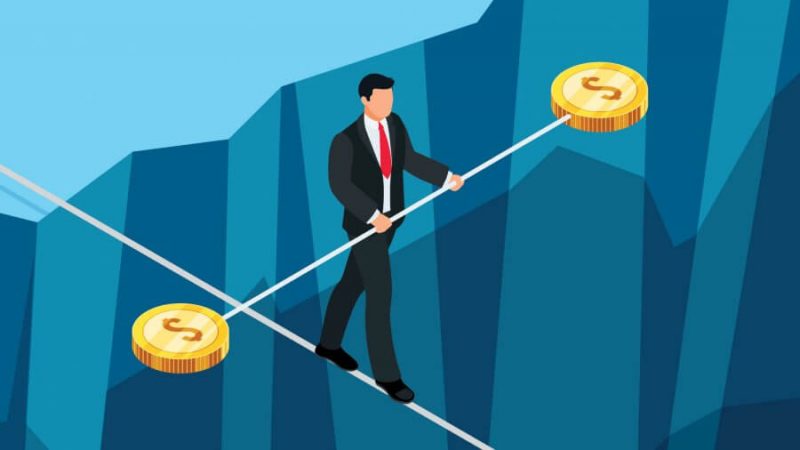 Stablecoins are a class of digital assets that seek to maintain price stability by being pegged to the value of a stable asset, like fiat currencies. Since 2014, over 70 stablecoins have been designed, and three sub-categories can be discerned: centralised IOU issuance, collateral backed, and seigniorage shares. Each of those have shown flaws and limitations, and it is difficult to see which one, if any, will succeed in the longrun.

Of all the stablecoins, Tether has been the most prominent so far, though today it lacks credibility. Launched in late 2014, it sits in ninth place in terms of market capitalisation for cryptocurrencies, with a cap of nearly $2.5bn. Each of its tokens are pegged to $1, which Tether holds in reserve.

The main issue with this model is that it requires a centralised authority to back its value. Such notions of centrality are anathema to the purists of the crypto community, because they entail the need for a trusted third party, which is precisely what cryptocurrencies seek to avoid in the first place. The lack of transparency and proof of financial standing shown by Tether shows exactly why this is so. Currently the company is under investigation, based on whether or not the $2.3bn it has issued in tokens to date are in fact fully backed-up. Moreover, a recent research paper has established that purchases using Tether were behind the “Bitcoin boom” last year, thereby supporting “the view that price manipulation may be behind substantial distortive effects in cryptocurrencies.” TrueUSD, another USD-backed and fully-fiat collateralised stablecoin, has been much better than Tether in terms of its transparency, with third-party attestations regularly carried out and published. Its market cap is however comparatively minimal, currently standing at just over $61m, but could rise considerably once the investigations around Tether unravel.

Collateral backed stablecoins have the benefit of being decentralised, and so do not require the trust of a third party. In this model, the stablecoin is backed by a collateral which is itself a decentralised crypto-asset. Stability is achieved by locking up collateral in excess of the amount of stablecoins created.

For example, Maker, a decentralised autonomous organisation, has created a stablecoin backed by Ethereum, which sits as collateral in an Ethereum smart contract. Although this approach means there is no requirement for a trusted third party, the evident problem is that the collateral is itself a volatile digital asset, hence the need for the stablecoin to be over-collateralised. The risk is that a black swan event can cause the value of the collateral to drop rapidly, and consequently that of the stablecoin. Maker’s approach to mitigate this risk is to put a limit on the collateral in the early stages, until the platform is “robust enough to support inflationary dilutions.”

Seignorage shares are the final and most experimental approach to stablecoins. Following an initial allocation of stablecoins, pegged to the value of a fiat currency for instance, the supply of the currency contracts and expands algorithmically according to demand. These stablecoins are backed solely on the expectation they will retain a certain value. The fundamental issue with this model is that it relies on the assumption of the perpetual growth of the stablecoin system, which has caused economists to argue it cannot work. Examples of non-collateralised stablecoins include Basis and Carbon.

The key for the crypto-industry and stablecoins is that they keep learning from past experience and projects, whilst also asking the right questions of themsleves and the market. They seems to be doing so, and there are newcomers which look like they will keep stablecoins moving forwards. STASIS, a financial tokenisation platform, recently launched EURS, a stablecoin backed by the Euro, and will operate using weekly verifications and daily statements by the liquidity providers, thus providing continuous transparency of reserved assets. Its order volume is projected to reach $500m by the end of the year. Also good news is the projected launch of new stablecoin pegged to the USD by Circle, a fintech company backed by Goldman Sachs. It has acknowledge the many deficiencies of existing fiat-backed stablecoins like Tether, and promises to offer operational and financial transparency, as well as to operate within a regulated legal framework. Bitmain, a major Chinese crypto mining company, is investing $110m in the project.

Ultimately, the motivation behind stablecoins lies in the hope that they will be the class of digital assets which can lead to the mass-adoption of cryptocurrencies. Considering this, price volatility and adhering to regulation are not the only challenges which stablecoins need to address. Their ability to achieve scalability will also very much depend on how they go about developing user experience, which they can work by developing user-friendly platforms, but there may be some issues which technological innovation itself will not be able to resolve.

Ferdinando M. Ametrano, Professor of Bitcoin & Blockchain Technology at Politecnico di Milano, wrote in 2016 that “regular people are not ready to accept the new ‘data is money’ paradigm: these days it is still hazardous to commit a significant amount of money to the perceivable feebleness of the secure storage associated to a sequence of letters and numbers.” So, although stablecoins are currently resolving the price stability issue, there is another major hindrance to the mass-adoption of crypto currencies. More recently, Charlie Clarence-Smith – crypto-assets regulation expert of Pinsent Masons, the law firm that created Out-Law.com – commented that the challenge lies not only in technology but “also in changing habits and culture and in building trust in the innovative new solutions.” Indeed, much of the success of crypto-companies will depend on whether or not they are able to demonstrate their worth, usability, and also capacity to withstand crises.

Back in November 2014, Buterin wrote an article entitled ‘The Search for a Stable Cryptocurrency’, and he concluded with this: “The true cryptoeconomy of the future may have not even begun to take shape.” Stablecoins in their different shapes and forms have presented possible routes, and the crypto landscape has certainly evolved since Buterin wrote his article, but the future of the cryptoeconomy is still very much not mapped out.